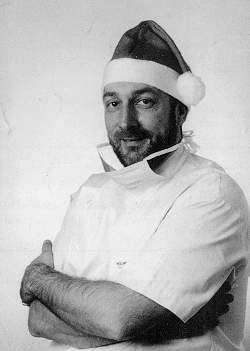 From
Your President
The EAPD Board & Council

We are only a few months away from BERGEN where the EAPD will be hosted for its 5th Congress and its 10th anniversary! In the meantime everyone should have received the well-made Congress brochure with all the details for attendees and participants in the scientific programme.

Within the Executive there have been two hot items. The first of these is the future journal (European Journal of Paediatric Dentistry). By now, all of the material has been received for editing for the very first issue! Secondly, there is the recognition of our speciality. Without promising a lot I would like to convince all the members that all activities towards the recognition of our speciality are followed very closely. Our EAPD Past President, Constantine Oulis, is attending almost monthly the meetings in Brussels.

Furthermore, a European Committee of Specialists (ECS) and qualified associates in dental medicine with its head office in Brussels has been formed. Our French colleague Jean-Michel Morand has monitored the founding activities of the ECS. This Committee will promote the recognition of Paediatric Dentistry, together with Periodontology and Endodontology. A meeting will be held in Brussels on March 11th and will be attended by your President.

Dear friends, please look forward to the next Millennium with your new European Journal of Paediatric Dentistry, with an excellently prepared EAPD Congress in Bergen, with an enthusiastic Executive Board and with maybe some breakthrough regarding speciality recognition.....

Nominations are required from EAPD members for the following posts, as per Chapter X of the Constitution:

The present Secretary is Professor Martin Curzon and the Treasurer is Dr John Roberts. Periods of office for these posts are for two years and cannot be held for more than six years consecutively. Professor Curzon was first elected in 1994 and Dr. Roberts in 1996.Nominations must be proposed by at least two active members of the EAPD and must be accompanied by a letter signed by the candidate agreeing to the nomination. Nominations should be sent by February 1st , 2000 to the Chairman of the Nominations Committee, Assistant Professor C. Oulis (address below). The nominations will be presented to the membership at the next biennial assembly in Bergen, where the elections will be held.

Monty Duggal was recently appointed to take up the chair in Child Dental Health in Leeds to succeed Professor Martin Curzon when he retires in October 2000. The appointment is effective from 1st December 1999.

Monty has extensive clinical, teaching and research experience with particular interest in dental trauma, childhood cancer, deciduous pulp therapies and cariogenicity testing of foods. Over the years he has obtained substantial research grants, conducted collaborative research overseas and published many articles in these fields. He is also the main author of the highly successful book "Restorative Techniques in Paediatric Dentistry, An Illustrated Guide to the Restoration of Extensively Carious Primary Teeth which has been published in five languages. We all wish Professor Monty Duggal every success for the future.

Please remember the deadline for abstracts for
5th Congress of EAPD to be held in Bergen, Norway on 7-11 June 2000
is drawing near.

Completed abstracts should be sent to:

Local anaesthesia has become an important part of daily dental delivery. A more profound knowledge of the method of action of pain perception and the possibilities to interfere with this resulted in the development of new formulations. This symposium will review current local anaesthetics used and their application techniques, with a special focus on their application in patients with special needs.

There will not be simultaneous translation!

STANLEY MALAMED is welcomed as principle speaker for this Symposium. Professor Malamed chairs the section of Anaesthesia at the Southern California School of Dentistry. This world authority in the field of local anaesthesia has many publications to his name and is the author of several books on the subject.

CONGRESS SECRETARIAT
Tel  + 32-16-332472
Fax + 32-16-332440    email:LUTV@med.kuleuven.ac.be
NEWS FROM THE BELGIAN ACADEMY
On November l lth 1999 the Belgian Academy of Paediatric Dentistry organised its yearly clinical symposium. A group of 40 people including academics, private practitioners and postgraduate students attended the meeting. After a first lecture given by Luc Bensch on transplant patients, Frans Vinckier and T'hierry Boulanger dealt with oncology Furthermore, there was a presentation on the obturation of root canals in deciduous teeth with zinc oxide-eugenol related to root resorption (Charle Philiplli) and a practical lecture on the indications and the performance of space maintainers ( Rita Cauwels). Finally D. Declerck reported on the IADP Congress held in London with a brief overview of the events.

After the scientific part the yearly general assembly was held. This year the Executive Board was to be elected. More than two-thirds of the active members voted and elected unanimously for Luc MARTENS as President for another two years, Charles PILIPILLI as Vice-President, Johan APS as Secretary and Dominique DECLERCK as Treaesurer.

The membership of EAPD is holding steady at about 320 members but new applications are being balanced by members retiring or failing to renew their membership.  Our target membership remains about 500 and therefore all members are asked to approach their colleagues to encourage them to join.

New members are either ACTIVE, who have completed recognised training or ASSOCIATE who have an interest but incomplete experience or training in Paediatric Dentistry. The Executive Board and Council are now recommending the ASSOCIATE members who have been members of EAPD in good standing for more than six years, and in exclusive practice of Paediatric Dentistry to upgrade their membership to ACTIVE. Anybody wishing to upgrade their membership should apply in writing to the EAPD Secretary confirming their exclusive practice of Paediatric Dentistry. There must also be a supporting letter from their EAPD Councillor.

Associate membership is awarded to those dentists who have completed some training in Paediatric Dentistry but where the Credentials Committee feels that the dentist applying has not satisfied the guidelines for full membership.  At the recent Council meeting it was agreed and approved that Associate members should have the opportunity to upgrade their membership to Active.  It was agreed that Associate members who had a continuous membership of at least six years could apply to upgrade.  A letter of application should be sent to the Secretary confirming that the Associate member had been in the full time practice (either Clinical practice, Teaching and Research) of Paediatric Dentistry for at least six years after having been made a member of The Academy.  This letter should be accompanied by  a letter from the Councillor of the country concerned confirming that the Associate member was in good standing and the proposed upgrade had the support of the Councillor.

The setting up of a web site and the new journal will involve an increase in costs for The Academy.  The web site will cost between £1-2 per member and the European Journal of Paediatric Dentistry about £10 per member. The Executive Board and then Council considered these changes and felt that a small rise in subscription would be necessary.  The financial assets of The Academy were good and some of the increased costs could be allowed for by cost savings and assets.  Therefore it was agreed that starting with the next annual subscription that the annual Subscription should be £40.00. Members should allow for this when subscribing.

From October 1 st 2000, there are three vacancies in the postgraduate programme of Paediatric Dentistry at the University of Gent (Chairman Prof Dr Luc MARTENS).

A substantial knowledge of the Dutch language is required which means that a six month language course has to be successfully completed.

EAPD COUNCIL
A meeting of the EAPD Council was held in London to coincide with the IAPD meeting. At thts meeting the most important items of discussion were as follows:

ID Cards
This was discussed again and the problems of when and how to issue them.  Many members were late payers of their subscriptions; there were £1,300 of subscriptions outstanding.  It was agreed to try and start the ID system by the Congress in Bergen.  Members Web Site was in operation.

Journal
It was agreed to proceed with a collaborative effort with the Italian Society of Paediatric Dentistry for a new journal, European Journal of Paediatric Dentistry (EJPD).  There was a need for the EAPD to have a legal status in order to enter into contracts with publishers, take insurance etc. It was agreed that the Secretary would look into this and set up a limited company with charitable, non-tax paying status.  This would give protection to EAPD and its members from any possible law suits and also save taxes on any investments.

EAPD Prize
The topic for the EAPD Prize to be assessed at the Bergen Congress was `Restorative Materials in Paediatric Dentistry' and applications for the prize were now needed.

Council Matters
Councillors were reminded that their term of office was six years and that arrangements should be made within their own country members to elect new Councillors.  It was recorded that Dr. Hubertus Van Waes was the new Councillor for Switzerland.  Dr Eli Ben-Zur was thanked for his many years of support for EAPD. Congress
It was recorded that all was set for the next Congress in Bergen and all members were encouraged to attend.  Future Congresses would be Dublin, June 15-17, 2002 in Trinity College.  Proposals for 2004 had been received from two cities and a choice would be made at the meeting in Bergen.

The Academy's financial year is January 1st  to December 31st.

The database shows at 2nd September 1999, we have 304 members.  Those who are eligible to pay subscriptions total 271, of which 218 are Active and 53 are Associate members.  Non-payers i.e. students, honorary members and those belonging to associated organisations, total 38.

Of the 271 from whom fees were due at January 1st 1999, 234 have paid, 37 have not.  Thus the Academy has a shortfall of £1295.  By country there is one defaulter from Belgium, Turkey and Romania, three from The Netherlands, Germany and Sweden, four Italians, five British and ten Greek members.  Would the relevant Councillors once again chase those in default from the lists I have distributed.

As I promised at the last council meeting in March 1999, I have submitted the Academy's accounts to a firm of Chartered Accountants, Citroen Wells, Devonshire Street, London.  They have produced an Income and Expenditure Account for the two years ending 1997 and 1998, and a balance sheet at 31st December 1998, combining both the Pound Sterling current account and the ECU deposit account.

It will be seen that our surplus funds at the end of 1998 were £30,710.04.  On the Income and Expenditure Accounts there is an item "Currency Exchange".  This gain or loss takes into account the movement of the ECU against the Pound over the relevant financial year.

The submission should be single spaced of no more than four (4) pages of A4 paper in 12 point print and should give:

1) The name of the student and their sponsor.
2) The background to the study.
3) The work study plan.
4) The timetable of research.
5) Key references to support the rationale for the research.

Only one submission is allowed per student. Four (4) copies of each submission for the EAPD Prize should be sent to:

Deadline for submissions: 1st May 2000

The European Academy of Paediatric Dentistry now has its own web site. The site has been set up by the web site committee which is lead by Dr Constantine Oulis, as Editor, with Professors Martens and Raadal and Dr. Lygidakis. The site can be accessed on:

The web page will be kept up to date by the committee.  There is unfortunately a cost involved and this will mean an increase in membership subscriptions (see section on Memberships).  This was agreed by Council.